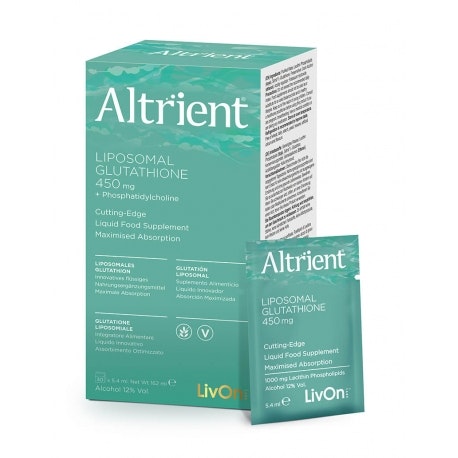 Free shipping for 3 or more items

Top up on defence nutrients with Altrient Liposomal Glutathione! This nutrient is present in the liver, heart and virtually all cells in the body, which underscores its biological significance. However, dietary restrictions or an imbalance in your general health could influence your body’s nutritional demands. Standard oral glutathione products tend to be poorly absorbed due to the action of an intestinal enzyme which degrades glutathione. Altrient Liposomal Glutathione uses the clinically researched Setria Glutathione as key ingredient. This is protected by a double walled phospholipid membrane while it journeys through the stomach, allowing it to be absorbed intact into the blood stream and transported to the cells where it’s needed the most.

Every cell in the body needs GSH.

When a cell is depleted of GSH, it dies. As we age, our body's GSH production diminishes, leading to a detrimental drop in the cellular functions that help maintain a healthy heart, brain, eyes, liver, kidneys, pancreas, and joints.

It has also been shown that the effect of physical and emotional stress, pathogens, toxins, free-radicals and ageing is to reduce your levels of glutathione.

What makes Altrient GSH so different:

Traditional oral forms of GSH are destroyed by the body's digestive juices, and it's been said the only efficient way to boost GSH levels is through time-consuming, uncomfortable and expensive intravenous injections. UNTIL NOW...

Altrient GSH encapsulates the GSH in liposomes made from Essential Phospholipids which protect it from being destroyed by digestive juices. Within minutes of taking Altrient GSH, the tiny liposomes are transported directly into the bloodstream, and into the cells.

Altrient GSH: one of the most efficient and cost-effective ways to boost your levels of the essential antioxidant Glutathione Sulfhydryl.

Bioavailability of up to 98% absorption is achieved because of a clever combination of Glutathione and essential phospholipids which form a major part of our cell membranes. Through the manufacturing process, phospholipids form tiny spheres around the glutathione. These spheres are known as liposomes.

These microscopic liposomal spheres are almost 100% bioavailable. That is what makes Altrient GSH so effective, as almost all of the contents in each sachet gets into your system.

From there it is further absorbed into the cells intact and ready to do its work. Other oral forms of glutathione are destroyed in the stomach so the only way to increase its levels was with injections or precursors.

The three amino acid precursors used for the synthesis of GSH - glutathione are also used in the body for other purposes; as such it may be used before it gets to the cells. Also as we don´t know how much GSH glutathione the body will make from the surviving precursors so consistent dosing is very difficult. These two problems are solved by using liposomal glutathione to deliver intact GSH - glutathione directly into the blood.

Liposomal glutathione is an exciting supplement: it is the body’s most powerful antioxidant and every cell requires it

In fact, your body makes it using a protein known as a peptide. You find the highest concentration of this protein in your liver. This is no surprise as this organ cleans toxins from your body. It is a special antioxidant as it is the only one that can work with enzymes such as glutathione peroxidase preventing oxidization of membranes. It also helps activate vitamin E and vitamin C.

Getting glutathione into the body is not that simple as it is destroyed in the stomach. Liposomal Glutathione has the advantage of being protected from the stomach because of the clever manufacturing process used. Glutathione and essential phospholipids are combined to form tiny spheres known as liposomes, which are almost 100% bioavailable. Essential phospholipids encapsulate and protect it and then release it where it is needed. It is like having intravenous glutathione but orally.

Why wait? Put Altrient GSH to your body’s test

Store in a cool, dry place.

Do not freeze or place the product in direct sunlight for extended periods of time.

Do not blend or vigorously agitate

Shelf Life: When stored properly Altrient C™ will stay 100% effective for a minimum of 18 months from the date of manufacture. The expiration date is on the bottom of each carton and on each packet as “EXP --/--”.